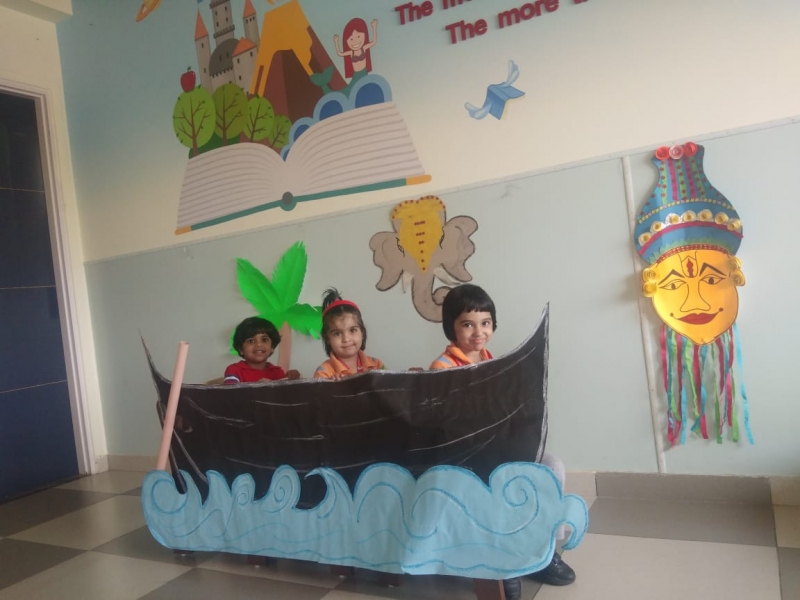 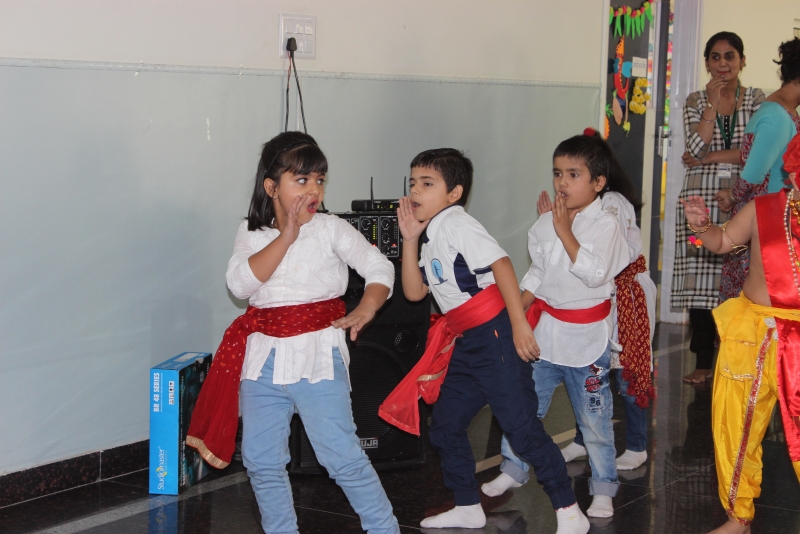 Festivals are the days which build group cohesiveness, inform, educate, bring people together and give us a chance to re-energize ourselves. Going by the above-mentioned notion, students of GD Goenka Public School, Bahadurgarh celebrated colourful festival of Ganesh Chaturthi on September 2 with much fervour and joy. On the auspicious occasion of Ganpati Ji’s birth, students of pre-primary and primary sections seemed very enacted as it was their best friend’s birthday. As a part of celebrations, class-I students exacted a skit based on Ganesha’s life very beautifully giving a strong message to be devotional and respectful towards parents. They also performed Ganesh Aarti, followed by a melodious devotional song and an energetic dance act. The whole atmosphere was charged up with festivity. The students were explained about the significance of the festival. Not only this, Goenkan, taking up the role of torch bearers paved the way for an eco-friendly way of celebrating Ganesh Chaturthi and decrease water as well as noise pollution. Use of eco-friendly Ganesha idol instead of one made up of Plaster of Paris (POP) was been emphasized along with refusing the immersion of POP idols in lakes and ponds in order to show their respect towards the environment. To add on to the fun, students enjoyed doing leaf printing activity to make an image of Lord Ganesha under the supervision and guidance of their teachers. The celebration for the day ended up with happiness and huge amount devotion towards Lord Ganesha. 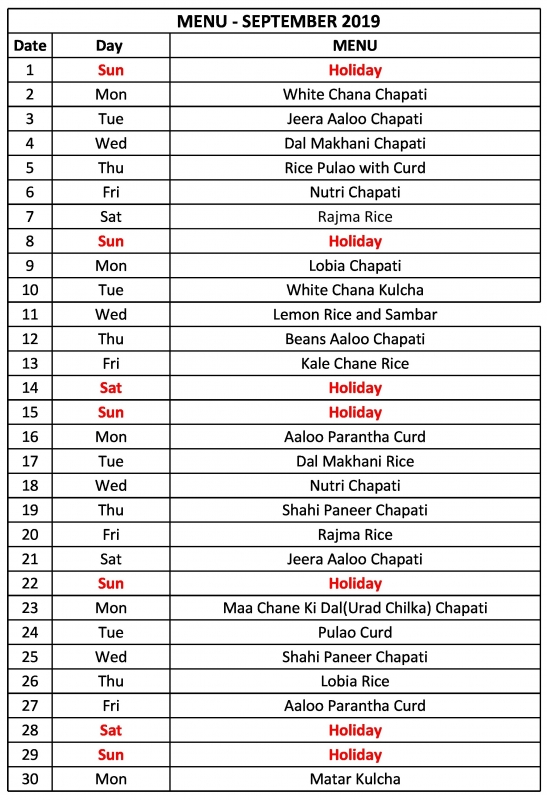 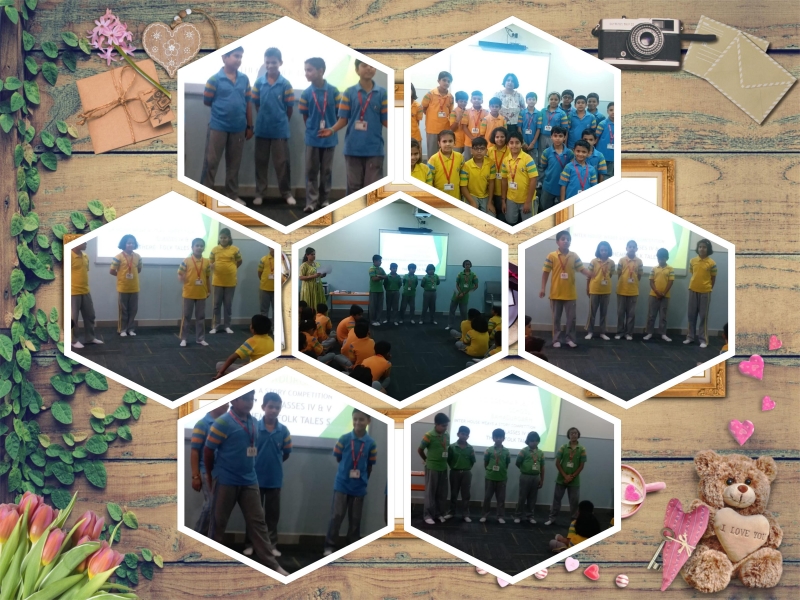 G D Goenka Public School Bahadurgarh organised an Inter-house “WEAVE A STORY COMPETTITION” on August 17, 2019. The theme of the competition was “FOLKTALES”. The students from classes IV and V participated in it enthusiastically. Two groups of 5 students each participated from each house. They were given a few lines to begin the story and they had to weave a meaningful story of their choice within three minutes. The students captivated the audience with their imaginative stories spoken with the right emotions and tone. The event was judged by the Honorable Principal, Mrs. Shivani Sahni, who appreciated the children for their astonishing performances. The 1st position was bagged by Group-A of Vivekananda House. 2nd position was shared by Group-B of Radhakrishan House and Group-B of Teresa House. 3rd position was bagged by Group-A of Teresa House. It was an event full of fun & frolic. 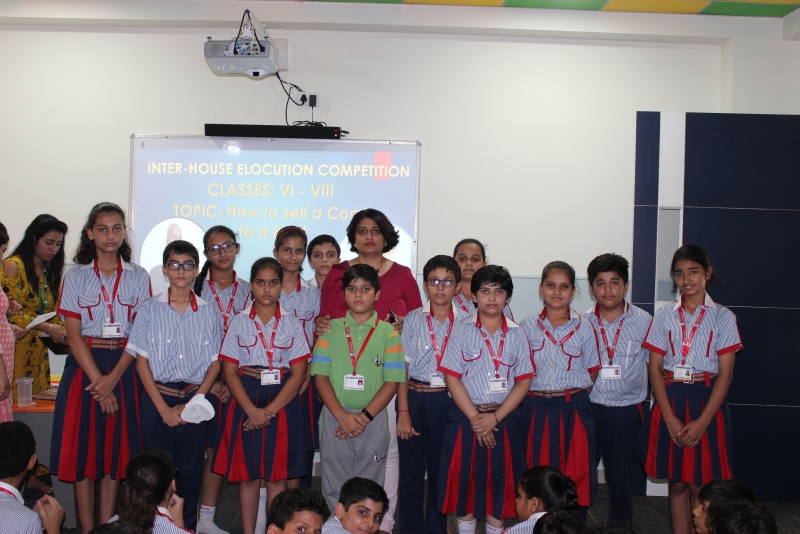 G D Goenka Public School, Bahadurgarh held an Inter-House Elocution Competition on 26th August, 2019. Students from classes VI to VIII, representing their respective houses, participated in the competition where they displayed enthusiasm and creativity. The topic given for them to speak on was " How to sell a comb to a bald"! To everyone's satisfaction 13 students were awarded a position out of 19 participants. The 1st position was shared by 4 students of Tagore and Vivekananda House, 2 students of Radhakrishnan and Tagore house shared the 2nd position, 3 students of Radhakrishnan and Teresa house shared the 3rd position, and 4 other students from Radhkrishnan and Vivekananda House got consolation prizes. The Honourable Principal, Mrs. Shivani Sahni, who judged the competition, was visibly elated to announce the results, as she appreciated and congratulated the students for their zealous participation, confident stage presence and eager involvement in all the activities being organised in the school. The day ended with a happy smile on everyone's face. 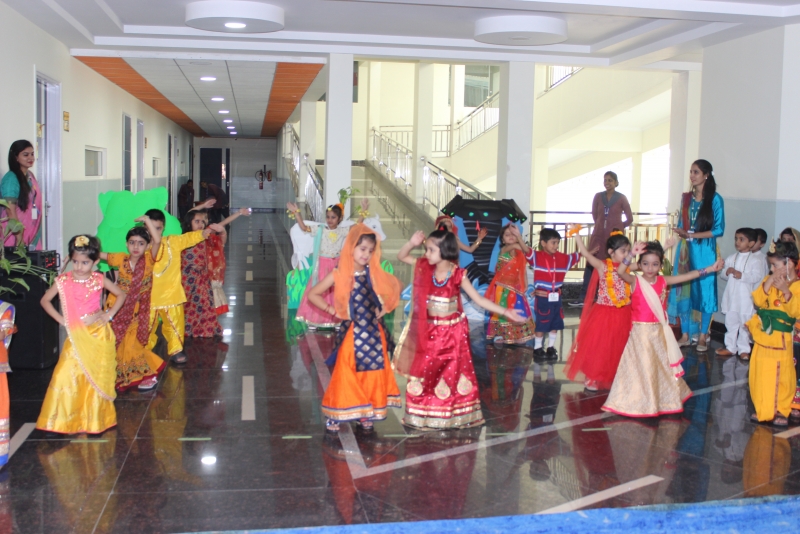 Sweeter than honey, tastier than curd, pleasanter indeed than any happiness and joy is the company, is the power of the name of Krishna. GD Goenka Public School Bahadurgarh has celebrated Janmashtmi Utsav with all passion and zeal on 22nd August'2019. A splendidly colorful program was organized by the students of Prep and Nursery of the school. They played the different roles of Lord Krishna ,Yashodha , gopikas and many other characters. They won the heart of all the spectators by presenting a Nritya Natika ( on kalianag). Dance performance by the little tiny tots of class nursery was cherry on the cake. Beautiful decorations were put up to make this event more cheerful and colorful. The celebration also spread awareness about the Indian tradition, custom and culture .It conveyed the strong message of Victory of good over evil 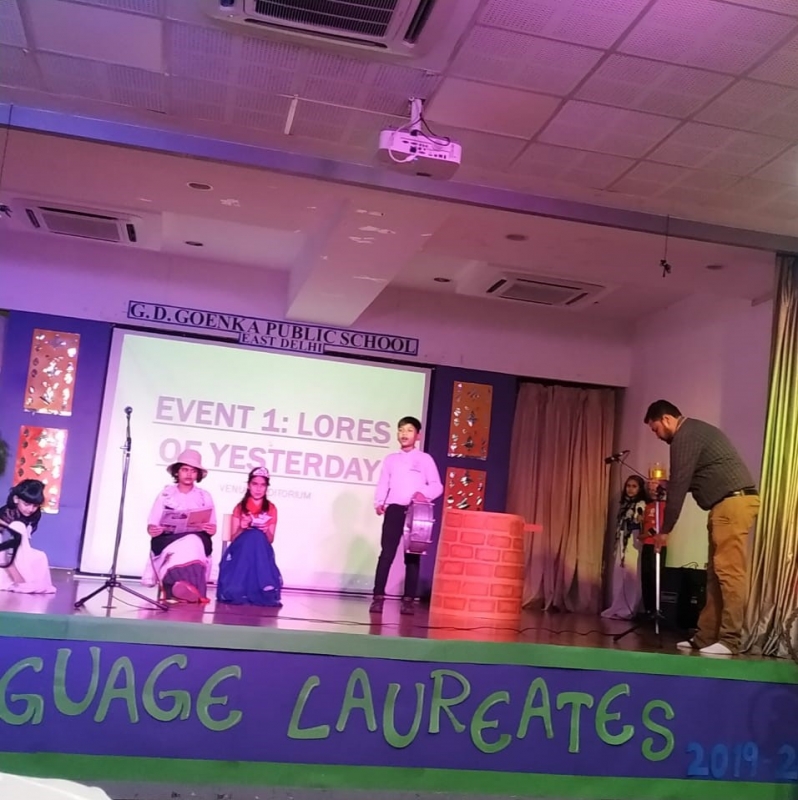 he students of GD GOENKA PUBLIC SCHOOL, BAHADURGARH participated in an inter school competition " Goenkan language laureates " held in GD Goenka Public School, Karkardooma . The students had a spirit of vivaciousness and zealousness and were highly enthusiastic for participating in the competition. The students participated under following categories: ‌1) Lores of yesterday- This event was based on english enactment competition. Students had to perform a skit which could be a French , Uk Or Sri Lankan folklore. The students of class 3-5 participated and displayed the colours of France by presenting a French folklore and bagged 3rd position , making the teachers as well as school proud. 2) Diaporama- students were supposed to make power point presentations and present it in the given time limit. Students of class 7-8 participated in this event and got a lot of exposure and experience. As it is rightly said turn your wounds into wisdom, students learnt about their shortcomings just to emerge better and stronger than ever. So, in the nutshell the journey has just started with many more victories to take place. 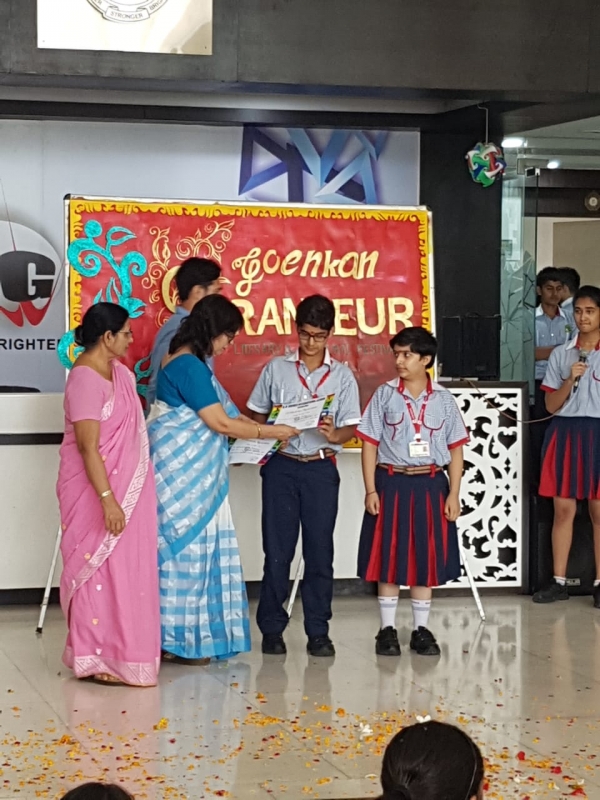 A series of Inter-School Competitions were held in GD Goenka International School, Sonepat on August 10, 2019. The students of GD Goenka Public School, Bahadurgarh from classes I to VI took part in all the Competitions with great spirit and fervor. Kirti Yadav of class II B won I position in Shape Art. Gaurika Rathee of class II A won I position in Hindi Paper Reading competition. Mayank Dabas (V), Arpit (V), Veer (V), Prikshit (IV), Ashita (IV) & Shivam (IV) participated in Hindi Kavita and won the first prize. Geetika of class III A won second position in Origami competition. Rudrakshi Sharma and Devraj Dalal of class VI won II position in Spell Bee Competition. Aryan Gulia (II), Bhavya (I), Ojeeta (II) did not win any position but gained a lot of experience. The students were given participating certificates. All the judges and audience appreciated the effort of our students and applauded them. Through this Inter school competition our students had enriched on confidence, experiences and learning. The school also won the rolling trophy for the session 2019 - 20. The students were felicitated with the winning trophies and certificates by the school Chairman Mr. Rakesh Joon & Ms. Shailaja Joon and Principal Ms. Shivani Sahni during Independence Day celebration. They admired the diligent efforts put in by the participants. 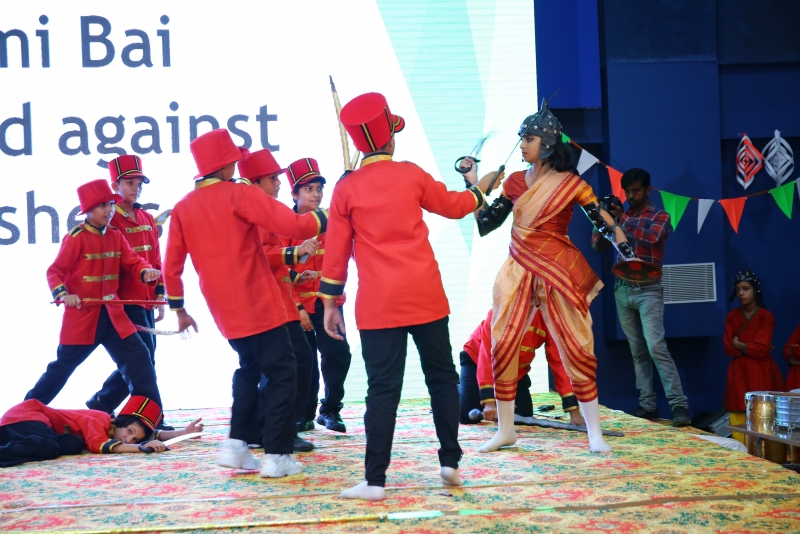 “Carried with care, Coated with pride, Dipped in Love, Fly in Glory, Moments of Freedom in Shades of Joy…………..” With this pride of being an Indian in mind, GD Goenka Public School, Bahadurgarh, celebrated the 73rd Independence Day, in a grand manner on 14th August, 2019, at the Shining Star Badminton Academy at HL City, Bahadurgarh. The celebration started with the National Flag being hoisted on the tallest pole of Bahadurgarh followed by unleashing the balloons by the dignitaries Mr. Ashok Kumar, SSP Jhajjar, honourable Mr. Rakesh Joon and Mrs Shailja Joon, chairpersons of GD Goenka Public School, Bahadurgarh, Mrs. Ved Kaur mother of Mr Rakesh Joon and the respected Principal of the School, Mrs. Shivani Sahni. Whole school proceeded to the Shining Star Badminton academy doing march past. There, after the felicitation of the Chief Guest and the dignitaries the array of programmes started with a melodious welcome song followed by a beautiful presentation by the students of the pre-primary and primary classes were they played the roles of our freedom fighters and martyrs. The programme contained with group songs, recitation and group dance performances. There was a silent act, put up by the students of classes VI and VII, which depicted the long journey of India as a nation from the Mughal era through the British Rule to the hard earned Independence in 1947. Towards the end of the celebration the music teacher, Ms. Sapna, sang “Ae mere watan ke logon” in her mellifluous voice arousing the fervour of patriotism in everyone present in the hall. The students of GD Goenka has participated in inter school competition held in GD Goenka International School Sonepat. They have won many laurels and felicitated during the celebration by Honourable Chairperson. Mr Shreekant Bakshi and Mr Hariawan were also felicitated for their contribution in the field of sports the programme ended with the vote of thanks by the academic head of the school, Mrs Shilpy Chadha followed by the National Anthem. To celebrate the essence of the freedom, a box of 4 laddoos was given to every child of the school.